From Tragedy to Ster: Keisha 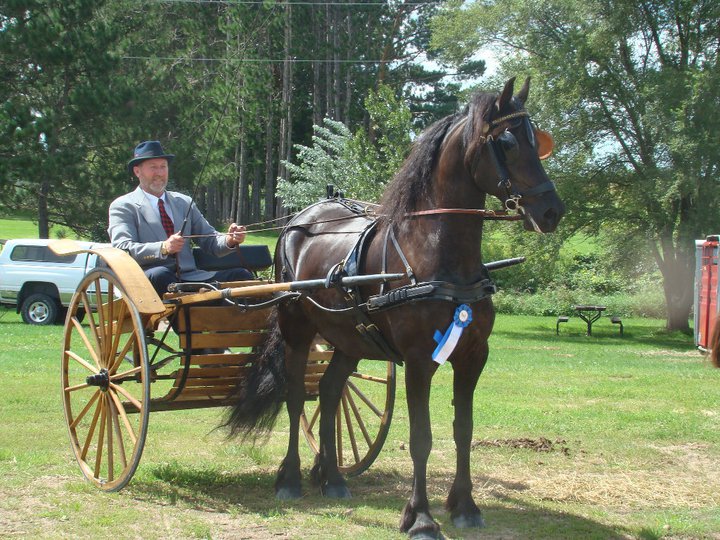 Markey’s tale begins after they returned to their home in Wausau Wisconsin from a much-needed vacation.  Upon arrival home, Lana did her routine rounds of the pastures to check on their beautiful herd of Friesians.  While doing her rounds, Lana noticed that their six-week-old Friesian filly, Keisha, was not weight-bearing on her front leg.  What could be wrong?  In order to better evaluate the filly, Lana and Larry cautiously brought her to the barn; they immediately contacted their veterinarian and maintained a watchful eye on her until their veterinarian arrived.   Following a complete work-up, the veterinarian diagnosed the filly with a spiral fracture of the right humerus.   Spiral fractures commonly affect the long bones of the horse’s limb, typically occur in the front legs, and these fractures can occur below or above the knee. There are a number of causes of spinal fractures in young horses such as a fall or direct trauma but in this case, it was not known what had happened to the filly.

Lana and Larry were very concerned about the health and future of this young filly.  Fortunately, Larry was an orthopedic surgeon, an expert on human musculoskeletal diagnosis and treatment.  With his training and academic background, he quickly researched the literature in order to help them make an informed decision on how to manage Keisha’s fracture.  There were a few options that they could consider including an invasive surgical procedure that involved plating, euthanasia, or conservative care that included prolonged activity restriction in a safe and confined space.  As the Markey’s carefully consider their options, they decided they could not put her down; she was an adored family member.  Also, with surgical intervention, it would be difficult to manage her in order to prevent damage or failure of the surgical repair.  After much soul searching, the Markey’s decided to treat their girl conservatively.   In their barn, Keisha could stand and move around in a restricted space in a stall with her dam by her side. Knowing it would take weeks to heal this fracture, they were willing to invest the time and resources to ensure the best outcome for their filly.  Larry believed that the stall rest option was the best given the filly’s age, the location of the fracture, and the fracture type.  In addition, the filly demonstrated the ability to stand and nurse despite the limb fracture.  All of these factors made this approach the most promising.   As the weeks rolled on, the Markey’s kept their physical distance from the foal in order to prevent evasive moves; they did not want the filly to evade because she presumed they were a threat to her.  In addition, Lana hung empty milk and tide bottles to pique her interest and keep her occupied.  Keisha was able to walk up to these objects to explore without excessively stressing herself.  Long story short, we are happy to report that the filly did well with her overall mobility.  After six weeks they noticed the filly pawing on the ground with the fractured leg and later she switched to pawing with the good leg which meant she could weight bear comfortably on the fractured limb.  Seeing this, Larry commented, “Look she is doing her own PT!”   Soon after witnessing these improvements, Lana prepared Keisha and her dam to leave the stall and return to the outdoors.  To do this safely, Lana hung up ropes to confine the area, restricting the space Keisha would return to.  Once completed, Lana opened the stall door and the dam and filly ran outside.  Unfortunately, Keisha broke through the ropes.  Larry calmed Lana and told her not to worry, that the filly would come back to them and in a few moments, she did!  It was truly hard to believe that this filly was running outdoors with no obvious lameness just a few months after the initial fracture.  Seeing that Keisha was doing so well, they took the ropes down and let her move freely in the pasture.

Happy Ending with a Ster

Well, how does this story ultimately turn out?  The adorable Keisha grew normally, she had no residual limb deformity, and the leg grew normally!  We are happy to report that at the age of three, Keisha went to her Keuring and was awarded Ster!